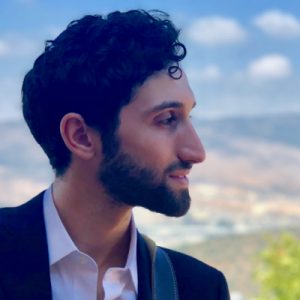 Singing session: In this session we will have the opportunity to sing Jewish music from various backgrounds and times. From the classical liturgical compositions of Luis Lewandovsky, to the timeless compositions of Naomi Shemer, all the way to the pop inspired melodies combined with the words of Tanach by Ishay Ribo, Jewish music is a vast and fascinating diverse genre. I look forward to sharing our voices together in song!

Bio: Edan Tamler is a singer, songwriter, performer and Chazan. He is currently the Chief Cantor of the Great Synagogue in Copenhagen, Denmark.
His musical career took-off as a result of his making Aliyah in 2012, where shortly after his arrival, Edan was a contestant in the first season of X-Factor Israel, reaching the finals as part of a boy band named Fusion that the Israeli judges built around him. He was subsequently signed by Ivri Lider, his X-Factor mentor, to produce his first album which is currently under production. Edan has performed in many venues and recently was the opening act for Lider in Caesarea and Misgav playing all original material.
Edan’s home is in Eshchar, Israel, a unique communal yishuv comprised of both religious and secular Jews located in the Lower Galilee.