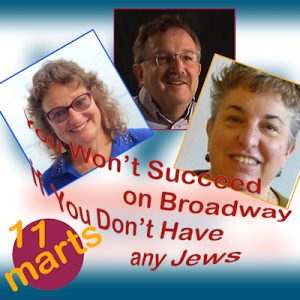 You Won’t Succeed on Broadway if You Don’t Have any Jews
Language: English

Session: In their musical satire Spamalot, Monty Python make this absolutely clear. But how much truth is behind this joke? To what extent is the Broadway musical a Jewish art form? What is the connection between the history of Jewish migration to the USA and the history of the Broadway musical? We will discuss these questions as we enjoy a live performance of selections from some surprisingly (and some obviously) Jewish themed musicals. Singing and dancing along are encouraged. and dance yourself.

Bio: Dorothy Goldberg:
Cantor Dorothy Goldberg moved to Copenhagen from Portland, OR in 2020, and there was delighted to join Rabbis Rebecca Lillian and Sandra Kviat as Shir Hatzafon’s chazzan in March of 2021. Before moving to Europe, Dorothy Goldberg served both Reform and Conservative congregations in Connecticut, New Jersey, Washington, and San Juan, Puerto Rico. She received vocal training early at the Manhattan School of Music Preparatory Division and completed a postgraduate diploma (Dip. Mus) at the Guildhall School of Music and Drama in London. In midlife, she chose to pursue ordination as a Cantor and attended the Academy for Jewish Religion, earning ordination in 2005.

Bio: Rebecca Lillian:
Rebecca Lillian is an interfaith activist, a Reconstructionist rabbi, a history teacher, a writer/editor, and a devoted Limmudnik. But before she was anything of these things, she was in love with musical theatre. She happily combines all of the above for this session.